The Isle of the Dead 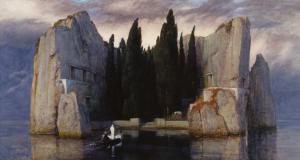 The symphonic poem „The Isle of the Dead“ op. 29 was written in 1908 in Dresden by Rachmaninov, inspired by a black and white print of the eponymous painting by Arnold Böcklin that he has seen in 1907 in Paris. He describes Charon rowing his boat over Styx to lay the dead to rest on the island. Death is omnipresent through the recurring Dies Irae motif.
When Rachmaninov first saw the original painting, he was disappointed and stated that he would probably not have composed the work had he seen the colored painting earlier.