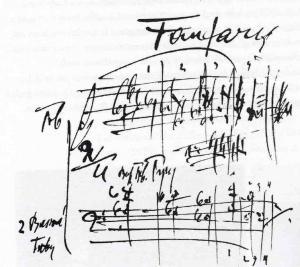 Czech composer Leoš Janáček (1854-1928) has been inspired by Moravian and other Slavic folk music to create an original, modern musical style and along with Dvořák and Smetana, he is considered one of the most important Czech composers.

One of Janáček‘s most important works is the 'Sinfonietta' op. 60 which was written in 1925 and was originally titled 'Military Sinfonietta'. Characteristic for the piece is the ‘Sokol Fanfare’ which causes a large brass section to be required for this work.The Sinfonietta became immensively popular especially in Japan by Haruki Murakami‘s novel '1Q84'.